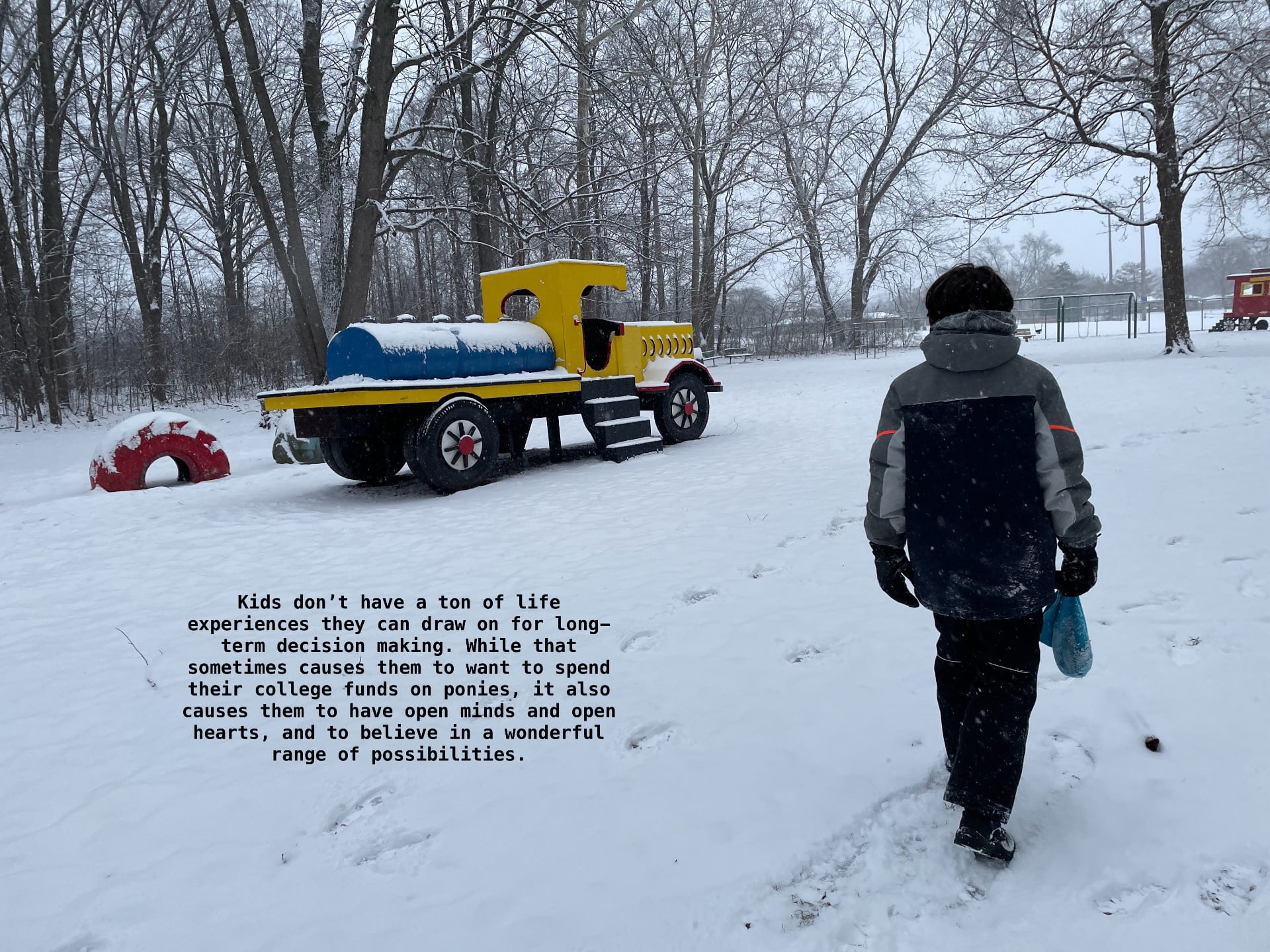 The other day our 8 year-old daughter approached me and began with, “Daddy?”

She continued, “Are you and mommy saving up money for me to go to college?”

I answered, “We sure are. We’re saving up money for you and your brothers to go to college.”

She said, “Great! How much is it going to cost?”

I told her, “Sweetheart, between the four of you it’s going to cost tens of thousands of dollars.”

“Wonderful!” She said, followed by, “I have an idea.

With an altogether straight face and not a hint of hyperbole, she introduced an option I had not yet considered. “Instead of sending me to college, you could use that money to buy me a pony.”

I realized she and I have very different perspectives on the matter. I also understood that we both have a stake in the outcome, that we were going to have to agree on a meaningful path forward, and that the meaningful path should result in fulfillment for her. After all, it is her life we were talking about.

Maybe, she would be happier with pony ownership that she would with a college degree. Maybe, if we end up spending her college fund on the purchase of a pony, she would end up becoming a pony farmer. Maybe pony ownership is something she feels strongly about and something she could find joy from. Maybe she would raise the first pony to ever win the triple crown or start a pony-pulled sled team that would eventually compete in the Iditarod. Maybe, if we deny her the pony we would be denying her the opportunity to live out a dream.

On the other hand, it seems to me that lot’s of kids talk about wanting ponies. Maybe it’s a passing fancy. What if depleting the college fund in favor of the pony is the wrong move. What is insisting on a college degree is actually the sound decision. Maybe it’s too soon to turn the long-term planning over to our 8 year-old. Besides, I can think of multiple degree that could potentially lead to any farming. Maybe we take it one step at a time and expand her options.

Maybe there’s a middle ground that would be suitable for all involved. We could send her to college while supporting the pony dream, and help her understand that there’s more than one way to achieve a goal. We could impart the valuable life lesson that not having something today doesn’t mean you’ll be without it down the road. Maybe insisting on college over a pony would help her understand that sometimes in life, “first thing’s first” is a good way to move about.

In the end, whatever happens, it’s clear to me that whatever we decide we need to work as hard as we can to understand her perspective and stand behind the vision she has for her own life. Kids don’t have a ton of life experiences they can draw on for long-term decision making. While that sometimes causes them to want to spend their college funds on ponies, it also causes them to have open minds and open hearts, and to believe in a wonderful range of possibilities. While steering them in “right” direction is critical, we should simultaneously seek to support them maintaining that magical perspective for as long as they can.

Thanks for reading…in it together for the kids!