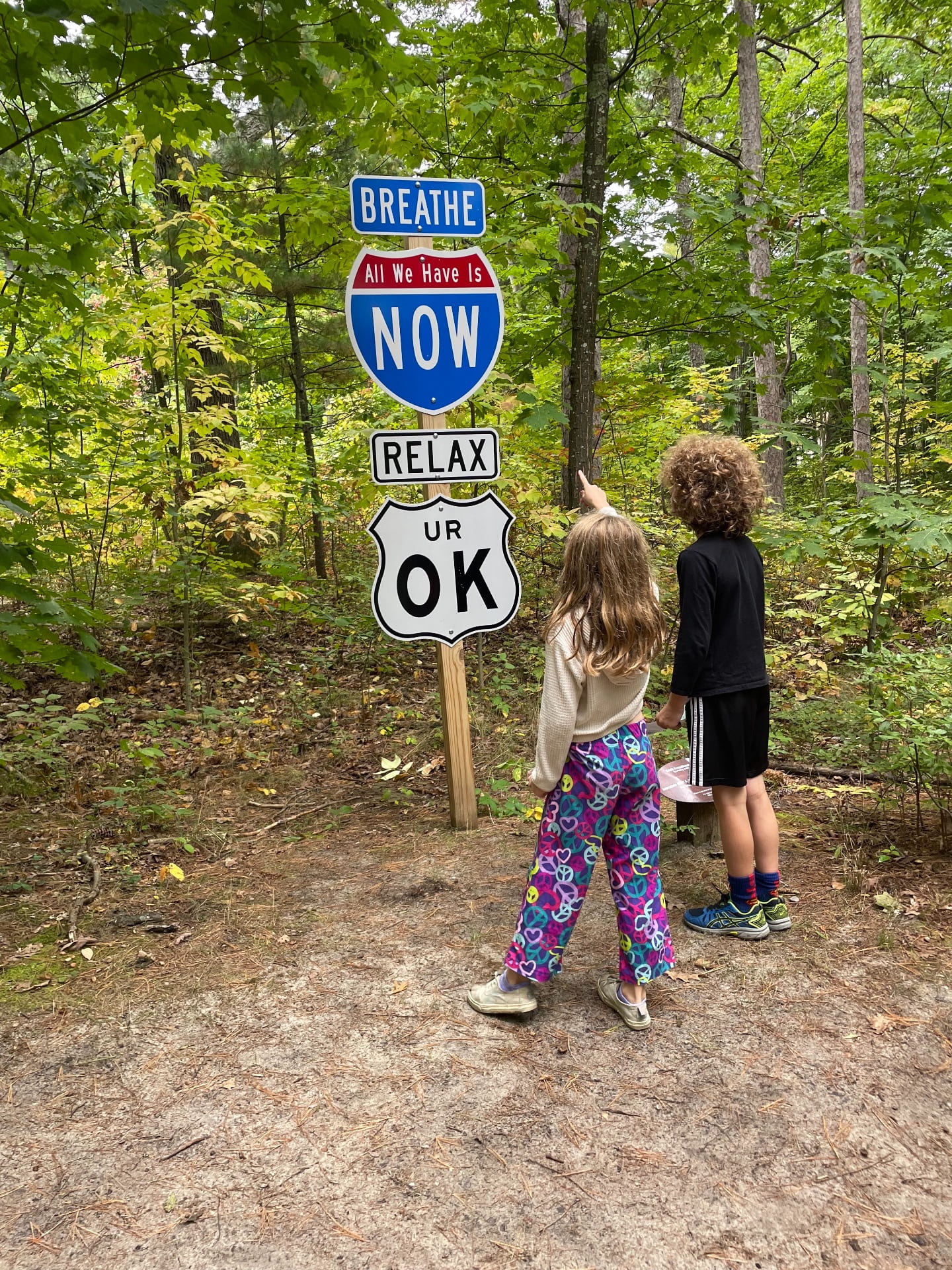 Breathe. All we have is now. Relax. UR OK.

This is the message on one of the many sculptures along the path of “The Walk of Art” sculpture park (“Art Rapids”) in our lovely downtown Elk Rapids – about five minutes from the farm. If you’re a northern Michigan enthusiast and you haven’t been to the sculpture park, I recommend you put it on the itinerary for an upcoming trip. It’s wonderful.

One of the features of the park are these intermittent offshoots of roadsigns, with messages of hope, love and inspiration. One is a stop sign that reads, “Start” instead of “Stop.”

Another is a “One Way” sign that’s not rectangular but heart-shaped, indicating that the only way is love.

Still another articulates the foundational message of this post.

Breathe. All we have is now. Relax. UR OK.

I like the message, and given that I’ve always viewed life as a journey, I like that it’s being broadcast from a road sign in this case.

Another important feature of the park (at least during our visit a few weekends ago) was an overwhelming multitude of what I’ve come to learn are called Oak Leafrolllers.

Oak Leafrollers are the tiny green worms that hang by threads of silk from oak trees. During this particular trip to the park it was as if we were transported into an Oak Leafroller obstacle coarse. They were everywhere.

The more we focused on the little tree climbing critters the more they seemed to multiply. We realized that they were on our clothes and in our hair. As we walked on we felt them on our arms and worried that they were getting into our ears and mouths. Phantom tickles and itches overtook us.

We began to duck and run. Then we rolled and crawled through the pathways of the woods like highly skilled military operatives. Finally, we ran faster then ever before, bobbing and weaving as we went. Occasionally one of us would grab another, sometimes dropping to the ground, frantically wiping and patting the other clean from these great green silk monsters before scrambling to our feet to flee some more.

Some of us were laughing with such uncontrolled enthusiasm that tears were streaming down our faces (that was primarily me and Lorelei – some proud parenting moments), while others had streaming tears as a result of the deep, genuine and unabashed fear-based crying they had succumb to in the face of this newfound tiny-worm terror (the kids were getting pretty excited about the sheer volume of leafrollers – the woods were dense with them). It was pretty close to utter chaos by the time we reached the car.

What’s worse, the leafrollers had sent battalions of their kinsmen to cover our car while we were fighting for dear life to avoid them on the forest battlefield.

We had to expertly navigate our way into the vehicle without letting them overtake us (of heaven forbid, get inside). The danger persisted. Some hung on for dear life as we drove away. We promised the kids that the wind would blow the rest off. It didn’t. We watched through the windows in terror as the strongest and most persistent among them clung on, taunting us the entire way to the farm.

In the end we survived the vicious attack of completely harmless, tiny little bugs to whom we were not doubt the most menacing, hideous and gigantic creatures imaginable…but only by the skin of our teeth.

Later, I looked them up on the internet. Turns out, collectively, they’re described as a nuisance. Curious. Really they’re just trying to eat some oak leaves, build cocoons, and morph miraculously into moths.

I wondered if maybe we were actually the collective nuance in this particular situation. You know, because we ran around screaming at them, swatting them with sticks, swiping them around, ripping them from their silk lifelines and violently disrupting their beautiful, natural course with unfettered  rage. Just a wonder I had.

It made me think about perspective. As parents and educators we often find ourselves in situations that are frustrating, and even unsettling. The Great Berg Oak Leafroller Battle of 2021 reminded me that thoughtful, compassionate reflection can serve us, and those around us well.

Whether we’re being attached by tiny floating worms or facing the bumpy road of child raising, calm hearts and minds tend to win the day, for all involved.

So as we continue together, if you can…breathe. All we have is now, and if you are able…relax. UR OK.

Thank you for reaching…in it together for the kids!