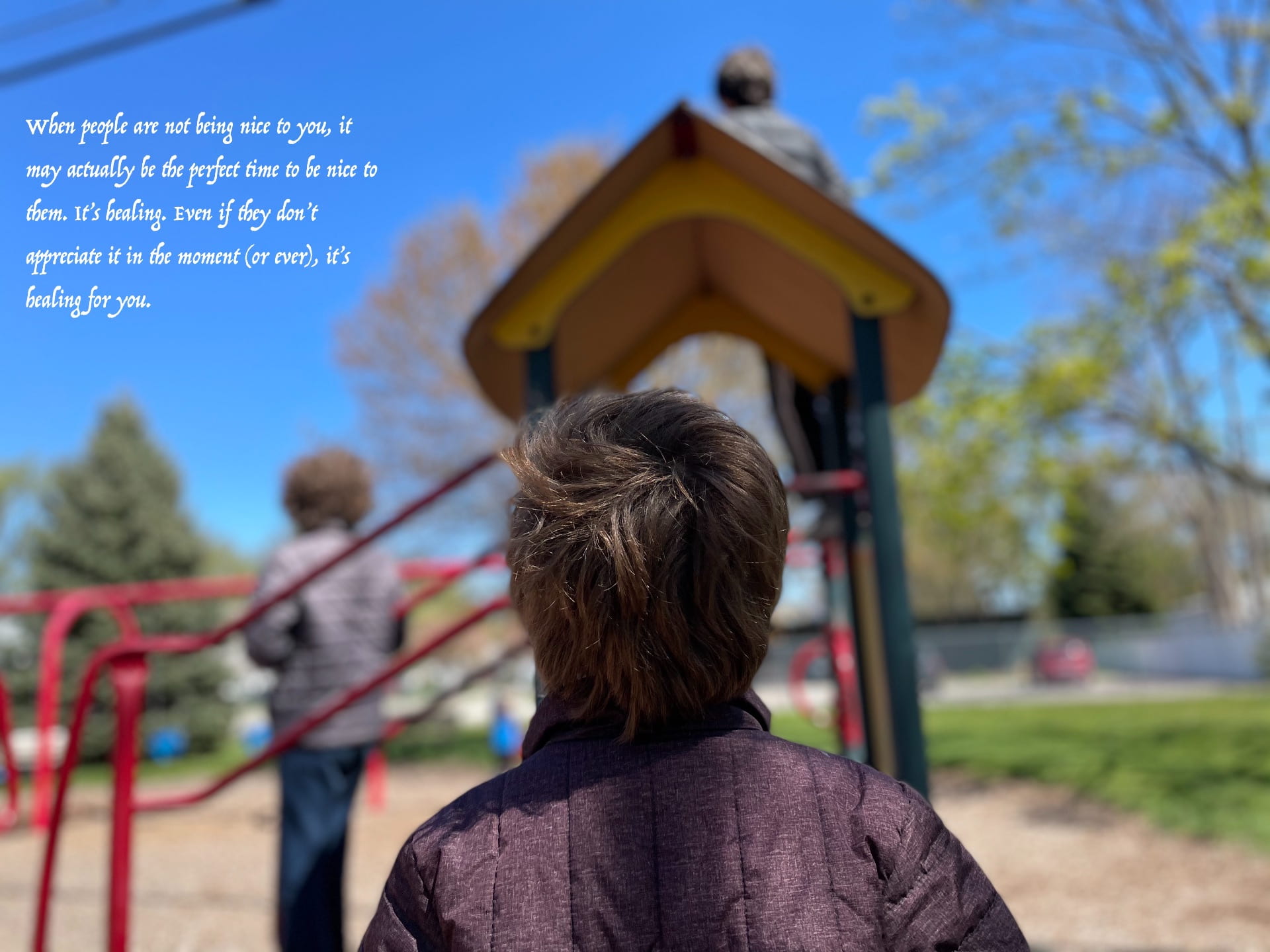 We were at the playground, deep into a game in which I was an ogre, our 6-yr-old was my ogre kid, and the big brothers (9-yr-old and 11-year-old) were humans we were chasing. The goal was to catch them so that we could eat them for dinner.

We were having a blast, running up and down playground structures, jumping, sliding, climbing poles, swinging on ropes, and growling.

The engagement was high and the excitement was palpable. It was one of those games, where every once in a while a bust of energy shot through you and you burst into high speed. We were at if for two and a half hours before something interesting happened (our 6-yr-old can most often be counted on for something interesting – the others too, for that matter).

The big brothers were several yards away, on the top of a hill. They were taunting us with some general, “Na, na, na, na, na’s” and their fingers were in the shape of “L’s” on their foreheads. Enough was enough for the kid ogre.

He turned to me and said, “They’re being so mean.”

Even thought they were just playing, he felt it. It was a game, but he felt sad that they were being so mean. Instead of crying, pouting, or quitting, he said, “This is the perfect time to be nice.”

I asked him what he meant by that. He explained.

Now that we know what it feels like when someone isn’t nice to you, we should be nice to them, so that they don’t have to feel that way. He suggested that, instead of running after them, trying to catch them and eat them for dinner, maybe we should try to get them to be our guests for dinner, and eat vegetables.

The suggestion didn’t sound as fun to the big guys, so we compromised. I would still chase them, trying to catch and eat them, but my ogre kid would try to convince me to befriend the humans and become a vegetarian. Still fun, and we still got to pretend that someone was in danger of being cooked and eaten – a favored play theme among my kids.

We stayed a while longer and continued to have excited fun.

Later that evening came to me with a big smile (that he was attempting to conceal) and said, “I had a lot of fun playing today.”

He said, “Ya, it was a really special time.”

My heart melted. We hugged. I would have liked for that moment to last forever, but as you know, they don’t (one of the reasons I write about them).

Here’s the thing…he’s was so right. When people are not being nice to you, it may actually be the perfect time to be nice to them. It’s healing. Even if they don’t appreciate it in the moment (or ever), it’s healing for you.

Najwa Zebian said, “Today I decided to forgive you, not because you apologized or because you acknowledged the pain you caused me, but because my soul deserves peace.”

Being mean is toxic. Being unkind is uncomfortable and stressful. Being hurtful is frustrating, and it diminishes well-being for both the hurtful and the hurt…both end up hurting.

Being kind is freeing. Being pleasant is elevating. Being friendly uplifts. Being nice is…well, it’s nice.

We should be nice. In fact, anytime, and all the time, may be the perfect time to be nice.

Thanks, buddy – you always know just how to deliver the message I need, in the moment I need it. I love you and I love learning from you.