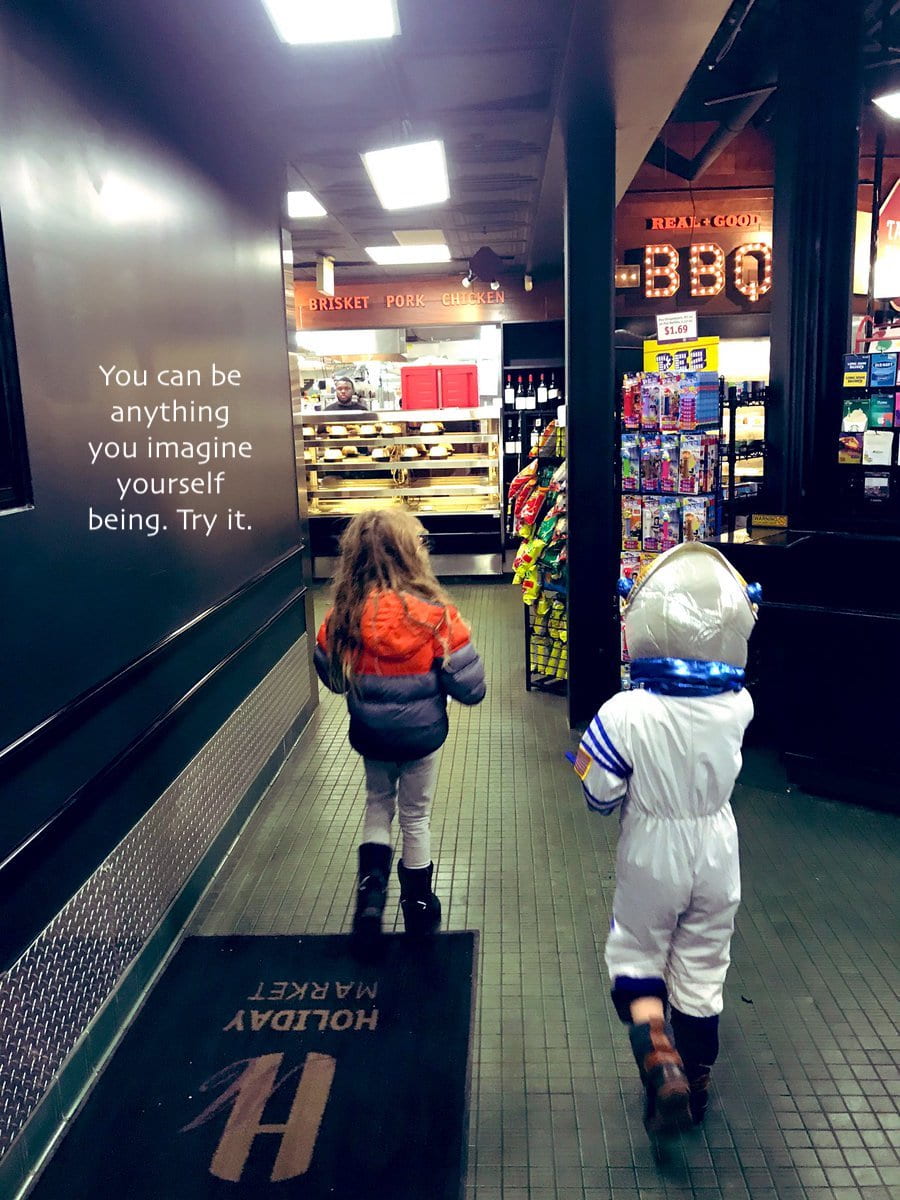 Robin Williams’ Peter Pan in Steven Spielberg’s “Hook” was a masterpiece. I highly doubt I’m alone in holding that opinion. If you haven’t seen it, stop reading, find your closest television, search it up, and see it now. Don’t forget to come back.

Amazing, right? Moving and inspirational around every turn.

I especially love the “use your imagination,” feast scene.

Old Peter sitting at a table with the lost boys, starving while watching a swath of colorful and covered serving dishes being set, steam emanating from each. Believing that they were filled with culinary treasures he could smell the feast, only to be holistically defeated as lids were thrown off to reveal the nothingness inside.

Peter’s face sunk as he stared at  the Lost Boys digging in without hesitation. In disbelief, he watched them believe. He was frustrated, confused, and desperate.

We saw nothing, too. Mr. Spielberg gave us Peter’s lens. It was brilliant. He would expose us to the wondrous power of imagination in the same moment it clicked for Peter.

At one point, Thud Butt (a lost boy) asked Peter if he was going to eat what was on his plate.  Peter looked down, shrugged his shoulders, and then passed the apparently empty plate across the table with is a sarcastic huff.  Thud Butt received the plate with glee.

Tink replied, “If you can’t imagine yourself being Peter Pan you won’t be Peter Pan, so eat up!”

And there it is. If you can’t imagine yourself being (insert your name here) you won’t be (your name again)!

Then a hint of the moment appeared. The turning point became imminent.

Peter engaged in a Battle of words with Rufio (the leader of the Lost Boys in Peter’s absence). It got heated. Finally, when enough was enough, Peter flicked a dollop of technicolored food-goop across the table at Rufio’s face. The thing is, it landed.

Everything stopped. Everyone was stunned and/or overjoyed. Someone said, “Your doing it Peter!”

Then, from that point forward, without exception or hesitation, Peter Pan was Peter Pan.

Among other things, I’m “Daddy Tickle Monster.” Imagine that.

I don’t know how it started. Our kids love being tickled, they love playing, and they love pretending. They have wild and vivid imaginations. I’ve noticed that all kids tend to.

It typically begins as soon as I walk through the door after work. One of the “littles” (our younger two of the four) greets me at the door with puppy dog eyes, fighting a sly smile, and simply asks, “Daddy Tickle Monster?”

Sometimes I hold them off for enough time to set my backpack down, take off my coat, and say “hi” to Lorelei. Eventually we end up in what I can only describe as a combination of a rugby scrum and Wrestle-Mania three. Laughing, shouting, attacking and recoiling. The kids assign personas to themselves. They call them out.

Usually, as they enthusiastically announce their stage names they leap into the air, only to land on me with an elbow to the lower back, a knee in the neck, or an entire little body smack dab on my head.

I do the best I can to protect myself. Sometimes as they land I’m curled up in a ball, and then as they try to get up I reach out with lightning fast speed for a quick tickle or an extended take-down. The old man always wins.

Yesterday, our five-year-old executed an incredibly impactful whomp during a particularly energized “Daddy Tickle Monster” moment. Imagine a frozen bag of sand landing on the side of your head from about three feet up. I let our a bit of a groan as I did my best to shake of the driving pain.

His sister redirected him in a deeply frustrated tone, “Hey, don’t hurt Daddy!”

How wonderful. She truly cares. A daughter’s deep and enduring love for her father is a beautiful thing to witness. Awww. That’s my girl.

Or maybe I thought too fast, because her next exclamation was, “If you hurt him he won’t be able to play anymore!”

Still, I know she loves me. I can just tell. I sure love her.

Anyway, they agreed that they should’t break their toy, and they negotiated a plan to “take it down a notch.” Neither Super Banana Jumper or Monkey Boy consulted me as they discussed the situation. It was as though I wasn’t even in the room. No more inflicting driving pain, though. That was good.

Agency, I thought. This game gives them power.

Imagination, pretending, and playing. This stuff helps kids learn how to visualize who they are and what they can be. It stretches their potential and opens wide the truly limitless possibilities they embody.

If you can’t imagine yourself being (insert your name here) you won’t be (your name again)!

I imagine myself as “Daddy Tickly Monster” during much of my life right now. Who would’ve thunk it. In my mind (and my heart), it’s among the most important things I am.

I also imagine myself as a leader and a learner, a partner in the service of thousands of kids, and a positive contributor the world I share with everyone I pass along the way, and even those I will never know about. I imagine myself this way through the triumphs and the challenges.

I consider it a part of my job, by way of teaching, modeling, and yes…playing, to give the kids I serve opportunities, tools and permission to imagine anything and everything they can. I expect them to do just that, and to top it off, I consistently imagine the incredible things to come!