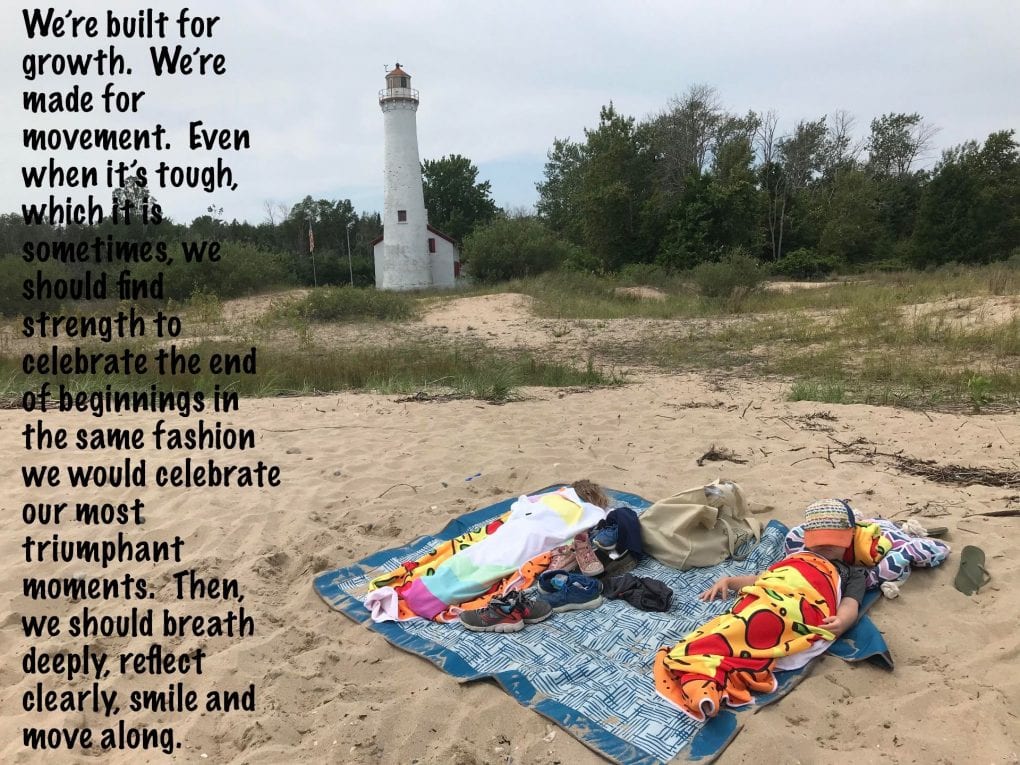 We visited lake Huron this past weekend.  It was a really cool place on Michigan’s east coast called Sturgeon Point.  There’s a one room school house, a lighthouse, and an awesome, rocky beach.  We’ve been all over the mitten this summer.  Sturgeon Point is quite different from the more tourist-populated, built-up destinations we spent most of our time at on the west side of the state.  That said it was among my favorites.

The rocks were smooth and colorful.  Many fossils for the kids to discover and collect.  The wind was blowing perfectly. Not to hard but steady enough for each blade of dune grass to stand a bit slanted and wiggling in unison with each of the others.  The waves capped off in white foam as they crawled toward the shoreline.

The kids’ kites lifted up out of their hands to dance above us with such little effort. On that day, and in those moments, they were all world class kite pilots; youngest to oldest.  The cheap wood and plastic apparatuses were dipping, weaving, diving and soaring at their will. Our three dollar kites would have thrilled even the Wright Brothers with their grace and utility.

I was in the waves.  It’s one of my favorite places to be.  A Michigan kid all the way.  The water was warm so a few of the others took the plunge with me, body surfing and horsing around a bit.

When they finished I still wanted to play, so I jogged through the whitecaps to the shore where the nine-year-old was fastidiously selecting rocks for his bucket.  I asked if he wanted to take a break and splash around for a bit.  He replied, “Do I have to?”

He smiled and said, “Maybe another time,” before dutifully returning to his task.

Ouch.  Maybe another time.  Ok.  I had no option but to grab the seven-year-old from a few yards away toss him back in the water.  Unlike his big brother, he had to.

I wondered about the line.  When does a kid change from someone who appreciates being forcibly (and lovingly) tossed into the lake to someone who doesn’t.  Different for each I suppose.

For a moment I had succumb to a whirlwind of reflective thinking about this seemingly horrible prospect.  If this ridiculous thing is happening to the nine-year-old what might be happening to his siblings?

The seven-year-old is stretching out.  There’s no more meat on his bones at all.  Where did it go?  All of his pajama bottoms are floods.  I could swear they fit him last weekend.  Is he at the end of the beginning of little kidish-ness.

The five-year-old doesn’t give me a hug and kiss anymore when I drop her off to play with friends.  Instead, she extends her tiny hand and insist, “Just go, Daddy!”  Doesn’t even look back.  I know because I do.  A lot. What beginning could she she be at the end of?

I don’t know what kind of fortitude I’m supposed to have, but thinking about all these ends of beginnings was really starting to get tough on me.  The previously enjoyable waves of Sturgeon Point, once calmly lapping at our beautiful rocky lighthouse shore had transformed into pulsating waves of mocking, taunting laughter that almost had me holding on for dear life.  “Time waits for no man!” They laughed.  “Your grip is slipping!” They provoked.

Until it hit me.  Things came a into focus and I quickly settle back into the great joy of my lot.

I’m a husband, a parent, and an educator.  It’s not for me to want for stillness, but rather revel in the movement that drives all I’m supposed to be doing.  I’m supposed to appreciate growth.  I’m supposed to look on independence with gratitude and find the courage to step ever-back as they move ever-forward and even away.  I’m supposed to find the strength to continue showering those I love with that love while I loosen my grip on their hands.

There are ends to my beginnings too.  Good ones.  Headed into my fifth year as the principal of a warm and welcoming school community in a progressive, cohesive district I feel that a beginning may be at its end for me.  To be clear, I have light years to go in my capacity for service and in my leadership practice.  It’s just that I know a bit more than I did before.  I have a bit more skill on the foundation of a few more mistakes I’ve been gifted to make in the bit more time I’ve had to practice my job, craft, my art.

As we think about moving into another energized and exciting school year I say we consider intentionally relishing the end of beginnings as it comes to us, to each other, and to the kids we serve.

We’re built for growth.  We’re made for movement.  Even when it’s tough, which it is sometimes, we should find strength to celebrate the end of beginnings in the same fashion we would celebrate our most triumphant moments.  Then, we should breath deeply, reflect clearly, smile and move along.

Cherished memories in our minds and our hearts and the conviction that our collective learning will guide us ever-closer to wherever it is we’re going…we should smile and move along.