Words are funny.  Sometimes they mean what we intend for them to mean and sometimes they mean something entirely different from what we intend for them to mean.  Occasionally, the form of delivery determines a word’s meaning; occasionally, the bank of knowledge and experiences on either the giver or the receiver’s part is the determining factor for meaning; and occasionally, word meaning is determined by the receiver’s point of view or state of mind.  Regardless of intention, any way you slice it, perception is reality.

People are funny.  Sometimes we communicate in ways that illustrate our intentions and sometimes we miss the mark.  When you’re in the business of parenting and/or organizational leadership, communication is a pretty important concept to think about.

Yesterday my son called out from the kitchen into the living room to see if he could have a pouch of applesauce (if you have little kids you know that applesauce now comes in pouches – space age technology).  I was standing right next to him, yet he still felt it necessary to get permission from his mother…smart kid.  He hollered, “Momma, can I have an applesauce?”

Momma called out, “Sure!”

The kid looked up at my before reaching for the pouch, and with a furrowed brow he inquired, “Does that mean ‘yes?’”

The word ‘criticism’ is a tricky one too.  When I ask people to be critical of me they seem to feel as though I’m asking for punishment.  I’ve been told that being critical is often perceived as being negative.  A supervisor once accused me of enjoying criticism.  I do.  He used to chuckle and force himself to be highly critical of me per my request.  He thought it was funny that I celebrated the criticism.  The funny part is that I saw it as a gift…a rare gift that not everyone is comfortable giving.

How many people in your life truly offer you criticism in genuine and productive ways?  All too often, we worry about hurting each other’s feelings by being critical of one another, but the fact is, we seem to have all but insurmountable biases when it comes to being critical of ourselves.  I believe that we’re each well served when those around us are able to occasionally be authentic and vocal about their perceptions of how we’re doing with regard to our capacities to live, lead, and learn.  I believe that helps us maximize our growth potential and positive impact.  I’m happy to hear critical input about myself to that end.  Sometimes I agree, sometimes I don’t, but I’m always glad to consider and reflect on it.

‘Death’ is another word that seems to be widely thought of as negative.  Even though most of us talk about the act as more of a transition than an end, and even though many of us believe that we’re eternally connected with our loved ones, it’s understandably difficult to be joyful through the challenges that surround our mortality.

I attended a beautiful funeral mass this morning.  The pastor pointed out that at birth we come into the world crying while those around us are joyfully celebrating.  He went on to suggest that people who live in a valued and fulfilling way (like the loved one who’s life we were celebrating this morning), are able to pass through death joyfully celebrating while those who remain are the ones crying.  He suggested that people who do it right end this journey in just the opposite way that they begin.  I was moved by his words and comforted by his affirmative interpretation of the connection between life and death.

How about ‘disappointment?’  Right now my wife and I are working hard to help our five-year-old develop skills and strategies to cope with it.  We’re viewing every disappointment that he experiences as an opportunity to practice/build those skills in the hopes that we can facilitate a process by which he will eventually become a satisfied, grateful adult, complete with a realistic self-awareness and a positive outlook on life.

He’s only five now, but it feels like he was born yesterday, so I’m thinking that eighteen is just around the corner.  When he doesn’t get to be first in line, or have a treat, or stare at a screen every time he want’s to, I tell him that it’s an opportunity to practice being happy, nice, and friendly – even through the feeling of disappointment.  He may not appreciate that now, and I’m quite certain that he won’t appreciate it as a teenager, but maybe he’ll have a healthy respect for his ability to cope with disappointment later in life.  Who knows?

From an organizational leadership perspective, it’s important to remember that everything we say means something to someone.  I might talk about my concerns regarding the negative triangulation of misinformation, and in doing so inadvertently diminish someone’s comfort with healthy venting.  The irony is that I find healthy venting to be a natural and necessary act when done discretely.  I might respond to an e-mail while I’m tired or frustrated and deteriorate trust in an effort to build it.  Educators have to be extremely intentional with our communication.  Everyone does, for that matter.

Part of that intentionality is recognizing that words are funny.  Delivering coherent messages is not always easy.  My advice (specifically to myself, but if you’d like you can have some too) is to be thoughtful, patient, and reflective.  The cliché’ is “think before you speak.”  I say thinking before you use words in any way is a decent and productive plan.  Then, as always, forgive yourself when things don’t turn out how you intended them to.  That genuine forgiveness is wonderful tool if you’re authentically interested in developing your word-smithing skills toward positive progress and personal growth.

So say what you mean and mean what you say, but remember that communication is a process and not an event.  Find the positive, adapt to the cues that are all around you, and never consider your learning complete! 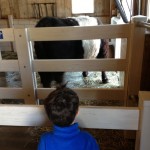