Merriam-Webster’s online dictionary suggests multiple definitions for the word “theory.”  I find, “an idea that is suggested or presented as possibly true but that is not known or proven to be true,” to be the most impactful one, as viewed through a researcher’s lens.  Specifically, think that definition works well for practicing educators and educational leaders engaged in ongoing action research framed by already-defined theoretical constructs.  In large part, research is designed to impact change in positive, progressive ways.  The developmental process by which change happens is embedded in a paradigm of possibility.  Using theory to guide research, with the understanding that there are ideas to be adapted and truths to be discovered, can be a powerful strategy for growth and development.

Dressman (2008) points out, “as research methodology has broadened in its scope, the ways in which theories are used have changed as well, from the generation of hypotheses to be tested to the use of theories as rhetorical “framing” devices that provide powerful metaphors that in some cases organized entire research projects” (p. 3).  In other words, research does not have to end in the proving or elaboration of any given theory.  Alternatively, theoretical beliefs and assumptions can be used to guide research that is intended to impact people, programs, and/or situations rather than the development of those beliefs and assumptions.  That kind of research is based on theoretical constructs or paradigms.

“Applying theory as a lens through which to view the social world is a powerful analytic process with significant implications for social change” (Allen, 2011, p. 16).  I think of the lens that Allen writes about as a theoretical construct, and the analytic process as research.  Suppose that people learn more effectively when they are joyful.  This is not an entirely implausible supposition.  In fact, there is a large body of existing research that suggests comfort, happiness, wellbeing, and even joyfulness can aid in productivity.  Stephen Covey’s incredibly popular strategies for organization and communication are meant to increase meaningful productivity and lead to “success.”  In part, Dr. Covey’s strategies focus on finding joy in one’s work, life, and relationships.

Regardless of Dr. Covey’s, or any other research, it would be reasonable for me to theorize that joy plays a significant role in learner productivity and success based on my own experiences, both as a learner and as an educator.  I can recall a multitude of situations in which the absence of joy left me preoccupied, and equally as many in which the presence of joy contributed to my ability focus on the task at hand.  I have worked with a several students who have lacked drive, and have pointed to challenging, joyless life scenarios as distractions from engagement and productivity in school.   I could very reasonably scaffold a research project on the theoretical construct that joy enhances learner productivity, without seeking to validate or otherwise justify it.

I could use case study methodology to identify ways in which joyful learners participate in the learning process, and then generate a list of behaviors that seem to lend themselves to meaningful engagement.  I could do a comparative ethnography of varied school or classroom cultures that speaks to joy as a motivator for learning, never attempting to substantiate the theoretical construct itself, only using it to scaffold understanding and progress with regard to learning cultures.  Research requires a starting point and a frame of reference.  A theoretical construct can provide both, even without defining proof that the construct is universally held to be true.  Furthermore, resulting data need not point to the validity of the theoretical construct, only to progress in the area of focus, or for the focus subjects of the research.

As an administrator I appreciate the use of theoretical constructs as the basis of ongoing research, because I believe that it diminishes the perceived intensity of research itself.  When research can move forward without the burden proof its assumptions, its accessibility is enhanced.  Besides, the outcome of such research will speak to that proof, even if in indirect ways.  The researcher and the research subjects can benefit from focused exploration, especially if they are willing to adapt according to outcome indicators.

I think that educators at all levels should be constantly doing action research.  Using personalized theoretical constructs to support that effort reduces formality and allows educators to weave reflection, analysis, and a growth mindset into their daily work.  By simply identifying critical challenges, framing them within a theoretical construct, collecting and analyzing related data, then applying those data to development through application, educators can effectively engage in continuing progress. 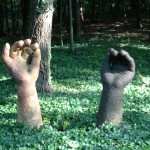